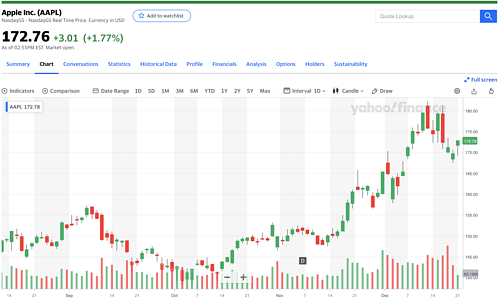 Technology and growth stock investors are likely aware of the sell-off that has impacted small- and mid-cap stocks in the face of inflation. Many names throughout the NASDAQ are down 30%, 50%, 75% from their highs.

Meanwhile, consumer electronics giant Apple (NASDAQ:AAPL) is near 52-week highs and up 40% over the past twelve months, a sign that investors are selling smaller, riskier stocks and buying large and established stocks like Apple. Be warned: Herd mentality can be dangerous for your portfolio. Here is why Apple could be the biggest disappointment of 2022.

What makes a bubble?
It doesn't sound right to call Apple a bubble stock. After all, it's worth nearly $3 trillion in market cap, its products are beloved by almost everyone, and its business produces hundreds of billions of dollars in revenue. But bubbles don't necessarily come from a bad stock or company; they come from consensus. When everyone in the room agrees, you should be the most cautious.
How does the stock market feel right now? Let's explore this a bit. The market appears to be very split at the moment. If you look at the broader indexes, things seem fine. The NASDAQ is at roughly 15,100, not too far from its all-time highs and up significantly over the past year.
However, only 26% of stocks in the NASDAQ are currently above their 200-day moving average, which is the average of a stock's closing share price over the past 200 trading sessions. Nearly 75% of stocks are below this threshold, implying the overall price action is unhealthy for most of the stocks in the NASDAQ.

If so many stocks are struggling, why is the index doing so well in comparison? Investors have primarily sold out of most NASDAQ-listed stocks and flocked to a select handful of mega-cap stocks carrying the index higher because they represent a heavier weighting in the index.

The heavy weight and continued rise in Apple's share price could help explain why the NASDAQ is holding up so well while many of its components struggle beneath the surface.

Identifying Apple as a bubble stock
Apple has continued to increase and is now up a whopping 40% over the past twelve months. But as investors continue to buy up shares, the stock price is outrunning the business, and Apple's valuation has soared over the past couple of years.
The stock's price-to-earnings (P/E) ratio has risen to 31, roughly double the stock's historical average of 15.

Investors should look for reasons why a stock deserves a new valuation whenever there is a significant gap from its historical average. In other words, we need to be able to justify why Apple should double its valuation. Otherwise, it becomes difficult to remain at this higher price over the long term; it could eventually revert to its historical "normal."

Apple has two major factors working against it. First, a company can have a harder time growing as it becomes larger. It's often easier to go from 0 to 10 than 100 to 1,000. Apple's market cap is approaching nearly $3 trillion, making it worth roughly one-eighth of the entire United States economy. The company should generate almost $400 billion in revenue in 2021. Apple is simply a massive company and an even larger stock, making it very hard to continue growing at a fast rate.

Secondly, this reality is starting to show up in analyst expectations moving forward. Analysts estimate Apple's earnings-per-share (EPS) growth over the next three to five years at 12% per year on average; it's a slowdown from Apple's average EPS growth of 19% annually over the past decade. So if growth is slowing down but the valuation is double that of its historical average, how can investors justify supporting this higher price over the long term?

Why the bubble might pop in 2022
Inflation has dramatically risen this year, pushing the costs of goods and services higher across the United States. Raising the federal funds rate is one of the Federal Reserve's primary tools to "cool" the economy and slow inflation down.
The Federal Reserve currently uses a target rate of 0% to 0.25%, implying that borrowing money is very cheap. It's a tool to boost economic growth and often increases valuations in the stock market.
If the Federal Reserve moves to raise its rate in 2022, it would likely have the opposite effect, making money more expensive to borrow, cooling the economy, and bringing stock valuations lower. In Apple's case, the stock is currently an outlier to its historical norms, making it vulnerable to a correction in a higher rate market.